Our main directive is to create a Reinforcement Learning agent to solve Unity Banana environment.

The environment was provided by Udacity, built on top of Unity Machine Learning Agents Toolkit.

In this environment, the agent’s task is to collect as many yellow bananas as possible, while avoiding blue bananas. Collecting a yellow banana grants the agent +1 reward, and -1 reward if the agent collects a blue banana.

The state space has 37 dimensions and contains the agent’s velocity, along with ray-based perception of objects around agent’s forward direction. Given this information, the agent has to learn how to best select actions. Four discrete actions are available, corresponding to:

The task is episodic, and in order to solve the environment, the agent must get an average score of +13 over 100 consecutive episodes.

Unity is not needed to run my project, I will be providing the environment files below:

Please note that if you want to run my model, you will need to download the environment file corresponds to your Operating System, and unzip it in the same level as the cloned repository.

After downloading the environment file and unzipping it to the correct location. You can start by creating and activating a new virtual environment (Python 3.6) to run my project. I used virtualenv

Then we can start installing the dependencies needed

Then to train the agent, you need to make a small modification to main.py file. Open it up and under line 22 where I defined the environment, the file_name parameter to the function call need to have the correct path to the environment file. After that is done, you can watch the agent trains in real time with

Alternatively, you can download my pretrained weights from here, place it in the same directory with evaluation.py and run

to watch a fully trained agent plays the game.

Experience Replay (EP) was also implemented, the idea of EP is to interact with the environment, store the experiences in a dictionary, and sample randomly from this dictionary to learn.

For neural network architecture, I used a 3 layers fully connected perceptron network to map from the state to action values. Each hidden layer consists of 128 fully connected units. 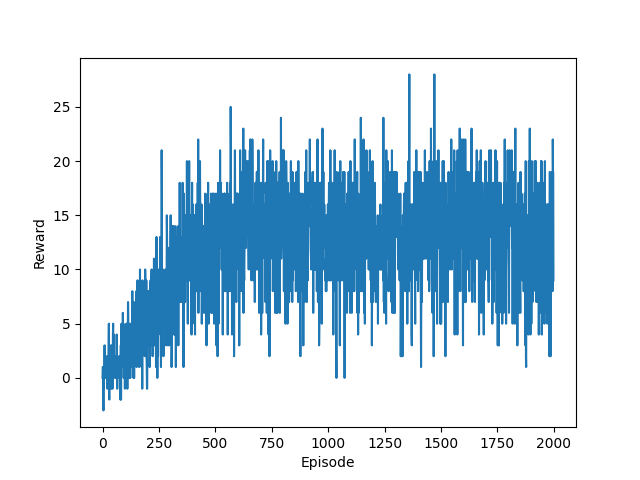 My agent was able to solve the environment in 503 episodes for regular DQN, and 381 episodes for Double DQN network.

There are many aspects in which I can improve this project. Implementing dueling DQN or prioritized experience replay would likely improve the number of episodes until solved.

Now that this environment is solved, I should try out solving the same game, but with a different state representation. Representing the state as raw pixels would be more realistic since raw pixels are what we see, and we should allow the agent to see the same.

The full source code for the project can be found here